​Shaun Parry has written numerous songs, including the music for an original Broadway musical. Until recently none of his songs were available to the public. In December of 2019 Shaun Parry joined ASCAP, the American Society of Composers, Authors and Publishers. His songs are now being published by MusicforMillions.

​
NEW SONG TRACKS OUT
​I have opened four of my original compositions on SoundCloud.
The first three were composed for the Broadway musical I am writing, THE FESTIVAL OF VENUS.
The fourth is a new traditional Christmas carol (for YouTube link, scroll down on this page).
​
Listen Here
https://soundcloud.com/shaunparrymusic
Tracks currently open:
* Moon Typhoon - piano/drums
* Let There Be More - piano
* To the Woman of my Dreams - solo voice - piano/drums
* It's Christmastime - choir/piano/chimes

MAY THE LORD BE WITH YOU
(Que El Señor esté Contigo)

This beautiful new song of comfort was written by Shaun Parry as he and thousands of people around the world fasted and prayed for his sister who died, was put on life support and miraculously came back to life. She is now living a fulfilling life raising her children and appreciating every moment of every day.

Hailed by composers and Broadway music supervisors as "profound and simple." 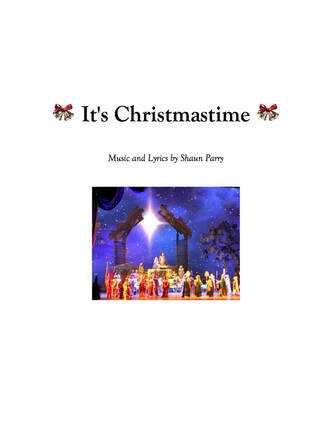 IT'S CHRISTMASTIME
(a new traditional Christmas carol)
​
Written in the style of classic Christmas carols with fun, memorable melody and lyrics, this new Christmas song will quickly become a part of your caroling tradition. By and large, Christmas music is either sacred or secular -- about Jesus, Mary, the shepherds and angels or about presents and parties and mistletoe. We live them both simultaneously. This carol represents that juxtaposition of sacred and secular, with the first verse being a patter of Christmas excitement and the second more lyrical, focusing on the advent of the Savior. Then, just as in life, they are sung together, complimenting each other. We end in unison singing a glorious and memorable refrain: "Nativity mangers make friends out of strangers with peace on earth, good will to all men."